Things could change, but as of now, WBA “Super” World Welterweight Champion Keith “One-Time” Thurman is favored to defeat WBA “Regular” Welterweight Champion Manny “Pac-Man” Pacquiao when the two men clash to unify the WBA titles. Here is a breakdown of some of the essential particulars about the fight. 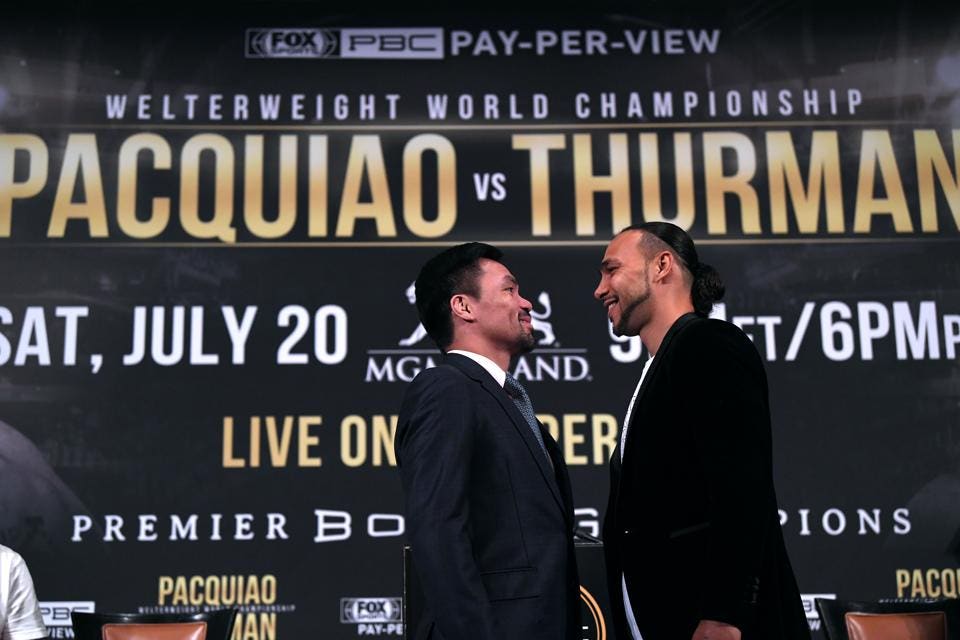 As of now, this looks like a great date for Pacquiao-Thurman. The only other boxing event of significance is the Dillian Whyte vs. Oscar Rivas card, but that takes place in London, which means it’ll go down well before Pacquiao-Thurman in the United States. Also, that card is nowhere near as significant. The UFC has an event that should be over by the time Pacquiao and Thurman are in the ring, and it’s a smaller scale event too.

Controversial former NFL player Greg Hardy faces another up-and-coming heavyweight and former football player Juan Adams. That looks like the main event at this point. With the NBA over and the NFL and college football not yet underway, there is a good chance Pacquiao-Thurman will be the biggest sporting event of the weekend.

Thurman has competed on FOX most often since signing with Premier Boxing Champions, and Pacquiao will maintain his position of power from a promotional standpoint. The TV broadcast of the fight should be available for order through all cable and satellite providers.

When Pacquiao fought Adrien Broner in January, the cost for HD was $74.99. I’d expect the price to be at least that for the Thurman fight, with the possibility of it costing $79.99 because it’s a title unification bout.

As was the case with the Broner fight, this one will almost certainly be available for purchase and viewing via live stream from Showtime. The cost should be the same.

Early this week, we learned the location for the fight. The MGM Grand was no surprise. It’s where the Broner fight took place, and Pacquiao has fought there several times in his career. Fun fact, Pacquiao made his American debut at the MGM Grand when he won the IBF Super Bantamweight title via sixth-round TKO over Lehlo Ledwaba back in June 2001.

When you consider that was 18 years and 26 pounds ago, and Pacquiao is still competing at the highest level, it serves as a testament to his almost unequaled longevity and brilliance.

Also, as no surprise, Thurman is favored to beat Pacquiao. However, oddsmakers don’t see Thurman as a heavy favorite. Experts are undoubtedly considering Thurman’s inactivity over the past two years, his last performance (a good, but not great unanimous-decision win over Josesito Lopez) and Pacquiao’s skill and experience.

Thurman is ten years younger, bigger, and skilled. It’s only natural he’d be the favorite. However, because of some of the things that I’ve pointed out, expect some late money to come in on Pacquiao, and the odds may change.

According to AXS, tickets are ranging from $100-$1500 with a maximum purchase of eight. These prices could fluctuate over the next month or so on the resale market. Tickets went on sale on May 20.

There’s been no official word on Thurman’s guaranteed purse for the fight, but several reports have Pacquiao making at least $20 million for the bout. He is wisely collecting paydays as he finishes out a historic boxing career.